How I stopped worrying about catcalling … 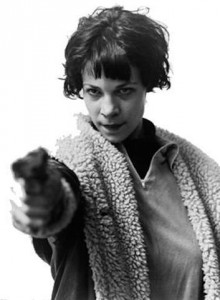 … and learned to punch people

The catcalling video from last week went viral, and you can already find too many discussions about it on the internet. Seems like some got offended to learn what they do is called “harassment”. But the idea of writing about the “catcalling” (to be honest, I only got to learn about this word through this viral video, even the name is utterly annoying) issue got to me after I punched this guy at the S-bahn station the other day. Well, you know (at least, I am sure women would know), the usual stuff, he cat called me, I gave him the middle finger, then he yelled at me “fotze” while walking away, and then I ran to him and started punching him, with bystanders around watching us, but I had not asked for any help anyways. Then, as if all men had made some kind of an agreement among themselves after the gone-viral catcalling video, I was being greeted, stopped and asked the most stupid questions out there to make a conversation more frequently than ever in the next two days. Seriously, I went berserk.

I would rather be aggressive than whiny (or, how we miss Valerie Solanas..)

Yes, I do not believe that harassment and trying to get a woman’s attention is necessarily the same thing. I think it is nice to preserve some spontaneity that knows its boundaries. I would personally expect the woman respond to the guy doing the catcalling, and then see what follows. That would have been more interesting to see. Getting a response (good or bad) is usually what they do not expect, but it is great fun to see the millisecond changes in his face in unbelievable ways, when you angrily tell them to piss off. Seeing their face when you punch them is priceless. Of course, I am aware of the risks of doing this (due to the rape culture surrounding us) and I cannot tell when to do it or not -as you yourself would measure the situation best-, but I also would suggest to carry pepper gas spray or an electroshock device with you in case in need of defense.
And I know this is hard to utter this in some post-modern feminist circles, but as much as I detest the blaming of the victim, or theories that which in some way are closely linked to expired views of essentialism or biological determinism, like the feminist troll Camille Paglia’s (also called an anti-feminist, although she would not accept 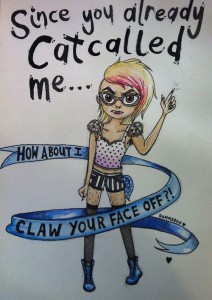 the term), I also dislike the fetishization with victimizing especially in the first world arena. We won’t be able to fully train a man how to behave, but what is also worrisome is our own victimization of ourselves, which leads to an underestimation of our sense of control and power. To be more precise, by this I mean the broad definition of harassment and rape (especially when it is applied to consensual sexual intercourse -but of course not in all cases which I won’t elaborate here-) sometimes prevents us from seeing our own control and power. Men like to test their boundaries, and we should not be intimidated to dictate them those, rather than a retrospective meditation about whether you liked or not what you had been subjected to. It just does not empower the woman image to deem ourselves as the helpless, in cases when we know for sure that we are not. In other words, if we don’t want to be seen and treated as objects, we should stop seeing ourselves as objects that are only acted upon, and practice our agency whenever we have the possibility. This will help reframe a weak woman image, which most guys are relying on. Any asshole that assaulted (especially verbally) you whom you did not immediately counteract, only finds more courage to repeat it on others. I especially like to offend them verbally in public, as being humiliated in public is sometimes even better than being punched.

It is all the black dudes

I think it is totally legitimate to be compliant about the cat calling and street harassment that we as women experience in our daily lives, and the video does a good job conveying that message. What caught my attention more was the unproportionate appearance (or, display) of black and Latino males in the video. I am not going to lay down statistics to show you white man in fact are more nasty or anything, it may be true that you get more cat called when you walk around in poor districts (as the woman in the video seemingly does), and even this would not have to do with races or genes, as Francis Galton imagined about some hundred years ago. It more has to do with social inequality and all the other drawbacks that it brings with, and releasing a video like this one only bears the risk of fueling racial stereotypes and more under-class hatred. This video is simply ethnically biased, and as I only confirmed later, white men were in fact edited out of it. So I am not convinced that this is the right way to fight for a cause, but it for sure spreads more racism… People with racial ideas already jumped on it to tell what they were apparently holding back for sometime, it seems.

Besides, I hope one day we will all be able to freely walk around without having to hear random guys having to acknowledge our beauty. I just know that this one that I punched will not be able to dare, again.