The international supporters of Ukrainian fascism: a tour through the Azov Battalion’s social network

Olga S., an Italian with Belorussian roots, is fighting for Europe. “Good-bye, enemies of Europe,” proclaims an image on her Facebook page, of a Spartan warrior brandishing both axe and sword. Next to this one, Olga has posted another image showing various people of color sitting on the subway; “Diversity = Genocide of Whites / Destroy Cultural Marxism,” reads the caption.

Olga S. is a committed fascist. She documents as much on her Facebook profile with pictures of Mussolini and of a dagger engraved with the slogan “Our honor lies in loyalty;” with swastikas and glorifications of Hitler; and with hate speech against leftists, foreigners, and Jews. And: Olga S. is anacolyte—and active supporter—of the Ukrainian Pravy Sektor and, above all, of the closely related Azov Battalion. She poses her children holding Pravy Sektor flags; she herself poses with Azov fighters whom she has visited in Ukraine. She collects donations and passes them along to her heroes; she administers the Facebook page “Pravy Sektor Italia”.

Olga is a small fish in the international support network of the Right,

but she provides a starting point. On 2 June 2014 she posted a photo: it shows a man, his face pixellated, in a Pravy Sektor party office. Above him hangs the red and black flag if the Ukrainian nationalist Stepan Bandera, with the traditional Tryzub in the center. “Glory to Ukraine! Glory to the Heroes! Glory to the Nation! Death to Our Enemies!” reads the caption—slogans Ukrainian fascists have used since the Second World War. 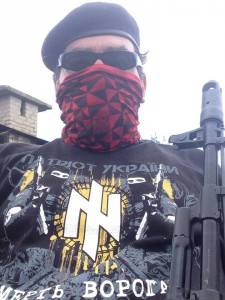 The name of the man is Francesco Fontana. He is from Italy and counts among the substantial number of international neo-Nazis and fascists whose support for the “national revolution” in Ukraine has gotten deadly serious. He serves as a volunteer in the Azov Battalion. Francesco belongs to the older generation, and thus had earlier been involved with the Avanguarda Nazionale
—the fascist terror group headed by the murderer Stefano Della Chaie. These days he is in the orbit of Casa Pound in Italy. His participation in the Ukrainian fascists’ armed struggle is also documented, albeit without the proper nomenclature, by the Italian journalist Fausto Biloslavo.

After a thorough review of hundreds of Facebook profiles, we believe that Francesco is by far not the only Italian to have found his way to Kiev and then into the Azov Volunteer Corps in eastern Ukraine. The organizational nexus might be Casa Pound. This group has been concerned with “modernizing” fascist ideology, and has recently seen exceptional success; already during the Maidan protests, they established semi-official contact with both the Pravy Sektor and the significantly more radical Social Nationalist Assembly (SNA).

It is still too early to name many names, and the fighters of the Azov 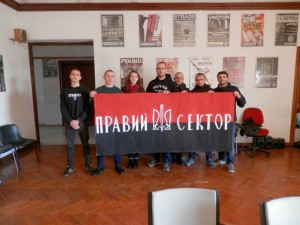 Battalion are obviously concerned with protecting their identities. Nonetheless we are under the assumption that at least two younger fighters from Casa Pound are also currently in Ukraine. Azov: “The Battalion of the White Race”

At this point it would be well to remark on this Battalion which is attracting so many international neo-Nazis. It carries the name Azov and was formed largely on the initiative of cadres within the Social Nationalist Assembly (SNA). Its commander is Andrij Bilezki, who describes the Battalion’s political aims thus: “There is a crusade for the white race underway in Ukraine, against all Semite-derived subhumans.”

This thesis is disseminated much more widely than the official press releases of Pravy Sektor (which seems like a harmless patriotic movement in comparison). One of the online mouthpiece sites of the fascists, on which Ukrainian texts are translated into English, presents the struggle against Russia in the same terms: Russia is completely rotten with “multiculturalism,” therefore “the current Ukrainian nationalists’ struggle against the Russian intruders is not just a struggle for independence, but one for the interests of the entire white race!”

“Black sun” and “Wolfsangel” – the label of Azov

In this manner, the Azov is significantly more radical than other rightwing Battalions such as the Donbass or Dnepr. Defenders of the Kiev government may insist its far-Right supporters are just your standard patriots; this is much harder to claim of Azov, because its fighters and their sympathizers make no secret of their openly racist, chauvinist, homophobic, National-Socialist-glorifying ideology. When one of their number, a young man named Aksion, was killed, he was eulogized in an official statement as having “walked the path of NS throughout his life.”

This supposed race war is attracting fascists from many countries. 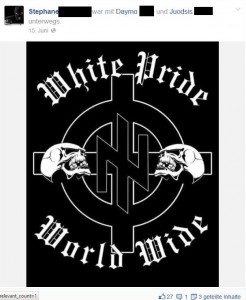 The man apparently managing the mercenary traffic into Ukraine is Gaston Besson. Besson is a rightwing soldier of fortune who had already fought in various wars and uprisings in Asia before going to Bosnia in 1991 to take part in the Balkan slaughter alongside Croatian neo-Nazis and Ustaša members in the famous Croatian Defense Forces (Hrvatske Obramene Snage, or HOS: the armed wing of the Croatian Party of Rights). Then as now, there were many international neo-Nazis in theater; Besson had several dozen foreign militiamen serving under him.

Besson speaks of wanting to build up international brigades, and claims to be fighting out of sheer idealism. Exactly what sort of idealism he means quickly becomes clear with a glance at his Facebook profile (from which he solicits volunteers to fight with Azov): Black Sun and Wolfsangel; songs by the fascist Croatian rock band Thompson. In his call-up to potential volunteers, he writes: “Don’t forget, we are the military arm of the SNA. We are social, national, and radical.” 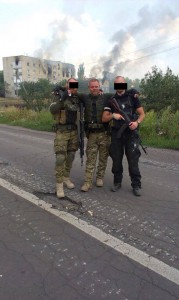 One man who has certainly not forgotten this—he traveled to Ukraine for precisely this reason—is the Swede Mikael Skillt. He served as a sniper in the Swedish army for seven years; he has moved among neo-Nazi groups for much longer. Before joining up with the Svenskarnas Parti, he was in the Swedish Resistance Movement (Svenska Motståndsrörelsen), which was founded by a former member of the White Aryan Resistance, Klas Lund. Skillt is the most prominent foreign figher in the columns of Azov, and is probably also one of the most polished professional killers at the service of the SNA militia. The BBC calls him the “White Power Warrior of Sweden” and he makes no secret of his ideology.

Judging from his own statements, at least one other well-trained Swede is present in Azov; how many Swedes there are altogether or how many there have been in recent months is hard to say, but in any case there are more than these two. The Svenska Motståndsrörelsen has a Finnish sister organization, the Finnish Resistance Movement (Suomen Vastarintaliike). According to the online statements of various cadres within the Azov Battalion (since taken down), some Finns are fighting alongside the Ukrainian neo-Nazis. Our research suggests they are members or sympathizers of the Suomen Vastarintaliike.

Naturally, Russians are not absent from this colorful potpourri of 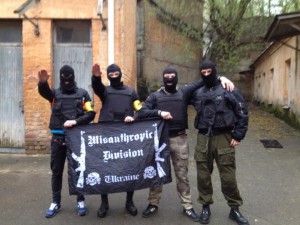 all-nations neo-Nazism. Standing on the side of Azov are militants from the so-called Misanthropic Division and the neo-pagan fascist troop the Wotan Youth. A text can be found on the Wotan Youth homepage which explains what the Russian neo-Nazis expect from the struggle in Ukraine: “Today, Ukraine! Tomorrow, Russia and the whole of Europe! We’re coming to take back our countries! To the new Reconquista!” Only “in war does one find his courage;” only “with the blood of heroes will the new nation be born.” The fight is against “new Asiatics” and “leftist cowards.”

Judging from the Wotan Youth’s own figures, it could be that there are more than two Russian militants (those two confirmed) fighting on the side of the Ukrainian nationalists. In any case the fight in Ukraine occupies an important place in some Russian fascists’ ideology. One of the these new Hitler Youth types, code name “Balagan,” has already been called to Valhalla.

Aside from that, Russian neo-Nazis such as the St. Petersburg-based group Nevograd – which regularly murders migrants on the streets of that Russian metropolis—support Azov and are traveling to Ukraine. Whether they are undertaking “military” or “civilian” operations there is still unclear.

Poles and Dutch are reportedly also present—but whe ther or not that is true does not really pertain. When we surf through the online profiles of neo-Naz is, read journalists’ corroborating reports from on the ground in Ukraine, and hear first-hand what our own friends have seen there, what we observe is: there is a network of extremely violent neo-Nazis connecting with each other across borders, the hard core of which doesn’t just pose with weapons for their Facebook profile pictures, but actually uses them, too. Leftists have a few things to work out if we want to meaningfully challenge this growing threat.

[…] When you consider that this particular battalion was relatively unknown it gives you an idea of how much is going to the battalions that are well publicized like Azov Battalion or Pravy Sektor. […]