No Place to hide!

Antifascist Action in the rural areas of Greece 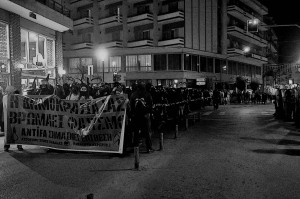 Greece still suffers from the economic crisis that started in 2008 and lead to the policy of various salary-cuts, massive privatization of public properties and a strong increase of deflation. Every third greek citizen is unemployed. After the long ranged salary-cuts, while prizes for everyday life-needs are still increasing, for a majority of people organizing a modest living avances to a serious problem. Simoultaneously a growing part of the population suffers from apathy – especially after the ineffectivness of the now illegal general strikes between 2008 and 2012. In this situation people tend to support parties new to the traditional party-System in Greece like the new social-democratic force SYRIZA, but also the neofascists of Golden Dawn (Chrysi Avgi).

The latter not only attracted attention because of murdereous attacks in the streets against immigrants and antifascist activists, but also for their official support for neo-nazi ideology. Like Al-Jazeera 2012 pointed out Golden Dawn provides good connections and support in state institutions like the military, but especially within the police units, which probably in majorority voted for them in the last elections. Also a high number of incidents were witnessed , in which the police forces joined Chrysi Avgi in attacking antifascist demonstrations and immigrants in the streets. After the murder of Pavlos Fyssas – an antifascist rapper and activist – by Golden Dawn Thugs, the greek state detained the leaders of the party – including their ,,leader” and member of the parliament Nikos Michaloliakos.

This tactical move of the state against their indirectly supported or at least tolerated ,,friends” of Chrysi Avgi didn’t solve the problem: In current polls the party still achieves 9-12%, after conservative authoritarian Nea Demokratia (ND) and SYRIZA. Their thugs still threaten immigrants and antifascist activists in all parts of the country.

In the past few years resistance grew against the growing influence of neo-fascism in Greece. While the Communist Party of Greece (KKE) and SYRIZA tried to work on a legal level, especially the anarchist movement faced the fascists in the streets and suffered from high repression by the state. A popular action were the so called motorcycle demonstrations, in which activists gathered on motorcycles and ,while shouting antifascist slogans, protested in quarters suffering from fascist violence. Not only in the bigger greek cities protests like this were organized by local antifascists, but also in smaller towns like Kavala and Xanthi – which are presumed to be a stronghold of antifascist action in northern Greece.

Compared to german cities Kavala, which is located in the northeast of Greece and is inhabited by about 80000 people, seems to be a smaller town. In the past Kavala was a stronghold of the communist party, because of the strong workers movement in the tobacco indutry till the fascist military-junta in the 70s started to populate the city with loyal inhabitants from the south. Amongst others for this reason Kavala appears to be a more conservative place today. Like many other smaller towns also Kavala suffers from the presence of smaller fascist groups. Beside the local group of Chrysi Avgi, also a group of the so called ,,Patriotic Alliance”, a split-project of ex-Chrysi Avgists and other nationalists, exist in Kavala. Both groups share a good relationship to the local police forces, but also within the military and private security agencies.
Also in Kavala this groups achieved attention by violent attacks and other public actions. For example the ,,Patriotic Alliance” nailed a bloody head of a pig on a local traditional muslim building, when the municipality planed to use the building for a museum to document the history of the muslim community of the city. Every year the groups also organize an anti-turkish demonstration – in 2013 this protests even lead to violent attacks on the head of the turkish diplomatic corps İlhan Şener. Finally Chrysi Avgi tried to celebrate the murder of Pavlos Fyssas by members of the party in the streets of Kavala last year.

Of course there’s also resistance against this tendencies: A growing group of antifascists with affinity to the anarchist movement and militant direct action is organized in the autonomous centres and infopoints of the city. Because of the good relationship between the local police department and fascist groups organized antifascists suffer even more from repression than most of similar groups in Germany. One member of the group is already in jail – others are accused of several delicts and are thretened by severe punishments.
One of the consequences is that antifascist protest in Greece seems to be much more militant.

Demonstrations of autonomous groups are well organized and coordinated. Participants are prepared with sticks, molotow cocktails, motorcycle helmets and other stuff in case that cops raid the demonstration. Public demonstrations and events by organized neofascists of Chrysi Avgi and Patriotic Alliance where in the past answered with militant direct action with some success: Both groups do not show up in public without appropriate police support any more. Also the ,,victory parade” of Chrysi Avgi concerning the murder of Pavlos was prevented and came to a quick end by several direct actions.The local antifascist group tries furthermore to inform the local population about neofascist activities in small leaflets or on public assemblies.

Recently the local SYRIZA group offered the autonomous antifascist group to join in with them in a bigger antifascist organization, but the group refused: ,,SYRIZA will be the next gouvernment, and if they mess it up – and they will mess it up – it will be Chrysi Avgi’s turn” says Dimitris* – an activist of the local autnomous group. A cooperation with the Communist Party (KKE) also is not possible – not even on the issue of antifascism. The party doesn’t want to cooperate with other leftist initiatives or groups denouncing especially the anarchist movement as ,,anarcho-fascist”. No good times for supporters of the antifascist concept of alliance-orientated civil resistance in Greece: Here activists still count on direct action.