[News from the Fringe III] Rebellious Scots to Crush 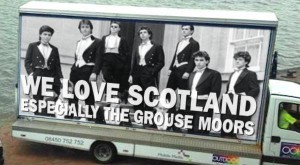 The elite British “No” campaigners as seen through the eyes of many Scottish people. Via twitter.com/beaubodor

Scotland is on the brink of changing the world in small but fundamental way. By answering the question “Should Scotland be a independent nation?” with YES on Thursday, 18th September, they will pull the final rug out from under the chauvinistic British empire and put the last nail in the coffin on an age-old imperialist mindset. And England did not see it coming.

Scotland entered into a deeply unpopular union with England in 1707, after the nobility and bourgeousie bankrupted the nation by investing half of all Scottish money into a doomed colonial expansionist project. Since then England has treated Scotland at best as a “junior partner” and at worst exploited and abused it, from the ethnic cleansing of Gaelic Scots in the 18th Century to being the labrat for extreme taxation under Thatcher in the 80s (that inspired the Exploited to sing “Dont pay the poll tax, stick it up her arse.”). Thatcher also ignored every call for Scottish devolution and right to self determination. She completely alienated Scotland to a point where her conservative Tory party was dead to the Scottish people.

This resentment for the Tories still runs high in every corner of Scotland. The current British Prime Minister, David Cameron, is as Tory elite as you can get – a member of the unbelievably upperclass Bullingdon club during his Oxford education (notorious for hiring lavish banquet venues and trashing them after dinner). And although Cameron negotiated the upcoming referendum with the Scottish National Party (SNP), typical condescension allowed it to get this far. The British Government did not take it seriously, did not believe that Scotland could possibly want out of glorious union with fair dear England. Until last week when Polls showed the YES vote at 51%. This sent Cameron into a panicked, frivolour gestures such as raiding the Scottish flag above the British Prime Minister offices. Cameron also made a painful, last-ditch attempt to win over a NO majority by emotion rather than reason: “If you don’t like me – I won’t be here forever.” Whined Cameron with desperate rhetoric “If you don’t like this government – it won’t last forever. But if you leave the UK – that will be forever.”

That England has treated Scotland so shabbily is a tragedy. But what is also potentially a tragedy is that an independent Scotland may end up being run by Scottish neoliberals. The Scottish National Party, who will inherit control of Scotland, identifies itself as a social democratic party but has always been economically conservative. It enjoys the support of many leftist parties and organisations due to its progressive tendencies in social topics and under their rule, life in Scotland is better for the working classes. However, come independence, their main plans include cutting corporation tax, supporting “job creators”, and relying on drilling for oil as a primary source of income. Although the SNP are commited to removing nuclear arms from within Scottish borders, they also wish to remain in NATO. In addition to this, an independent Scotland will still remain subject to the European Central Bank and international trading treaties. Scotland must remember to continue to embrace progressive, socialist policies after independence and not fall into the trap of allowing a corporate takeover of their people. Once the SNP has managed to secure independence for Scotland, they will have fulfilled their purpose and should step down.

Nationalism that leads Scotland away from British imperialism and into independence is the way forward. But an independent Scotland lead by a nationalist political party makes little sense.