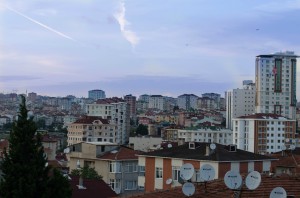 A sense of disquiet has taken hold in Istanbul over recent days. The sky is overcast, lightning flashes and thunder roars as people seek shelter in the shops and passageways of the metropolis. A storm is brewing.

I have now been here for almost exactly a week. Istanbul, with its 14 million inhabitants, is Turkey’s nucleus and showpiece: the centre for culture, commerce, media and finance. The city pulsates, polarises and fascinates. It was, of course, an easy decision for me to spend two months here, getting an authentic glimpse of Turkey, its inhabitants, its culture and especially its politics.

I am staying in Ataşehir. It lies on the Asian side of the city, about 20 kilometres from the harbour district of Kadıköy and a long way from 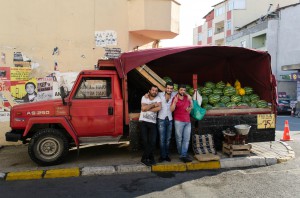 the city’s tourist attractions and chic boulevards. It is not only the taxi meters that run at a slower place here than in the tourist regions of the metropolis. Tourists very rarely end up in this area. Some locals are even convinced that no tourist has ever been seen in these parts before. Ataşehir is symbolic of Turkey’s dividedness and the increasing class categorization of its society.

Here, there are no high-end boutiques, no trams and not a single image of the Prime Minister, Recep Tayyip Erdoğan. Day after day, the bass speaker in a vegetable stall fills the streets with its drone. If you want to buy something, you simply lower the right change down the wall of your house in a bucket and pull the shopping back up. Water is delivered to your door. The atmosphere in Ataşehir is informal. People know, help and value each other.

As a tourist, you stand out in this part of Istanbul. My first trip to the supermarket attracts the whole neighbourhood’s attention. 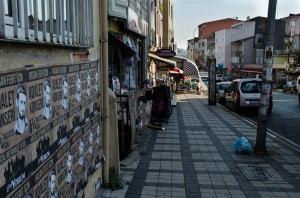 Employees leave their work stations to see what kind of things foreigners buy. Everyone is smiling and friendly, but also somewhat reserved.

The Turkish presidential elections are taking place just a week after my arrival. There is a clear favourite: Recep Tayyip Erdoğan. As far as the Turkish Ministry of Education is concerned, the winner has already been chosen five days before polling stations open – the Prime Minister is identified in a newly published school textbook as Turkey’s twelfth President. I had expected an open election campaign. Instead, the contest seems uneven. On the European side of the city, it is impossible to get away from the incumbent Prime Minister. His features adorn house fronts, trams and underground trains. His opponents, in contrast, are hardly to be seen. They complain that the election is rigged. Who can blame them? The clearest indication of this imbalance is the air time accorded to each candidate. The Turkish national broadcasting company grants Erdoğan a whole 533 minutes of campaigning time. All the other candidates put together are on air for less than five minutes.

Erdoğan is deeply concerned with his own legacy. If he wins the 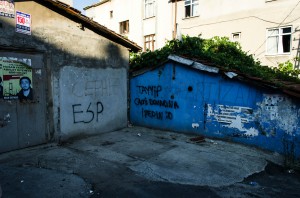 direct presidential election, he could, if re-elected, remain the leader of the Turkish state until 2024. It would then fall upon him to represent the country at the 100 year anniversary of the Turkish Republic, in 2023.

This is a nightmarish thought for the Prime Minister’s opponents. They foresee a fully authoritarian government, in which the judiciary, the free press and civil society are gagged. Their fears are very well founded.

Reporters Without Borders has been speaking out for years about the severe measures taken against both local and foreign journalists. In a list of 180 countries, Turkey currently comes in at number 154 for freedom of the press; and that is in a list which includes the autocratically governed Belarus and the Republic of the Congo.

The severe measures taken by the Turkish state against any form of free expression have been evident over the last year during the Gezi Park protests. Dialogue? Not even attempted. Outcome? Thousands injured and arrested.

Erdoğan does not tolerate any criticism. Anyone who dares to attempt it is soon branded a traitor to the fatherland. This applies to 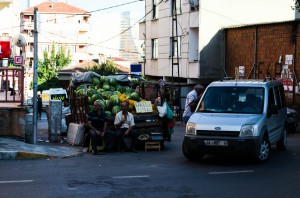 everyone, politicians and journalists included. Many journalists have lost their jobs for producing undesirable reports; some are even in prison. Everyone who has taken a clear stand against Erdoğan’s politics has felt the full force of the Turkish government against them. The government has been flexing its muscles before this year’s elections, too. If you drive past Taksim Square, right at the centre of Istanbul, you can see its fleet on display: bulldozers, policemen in combat uniform. A warning to the population.

It is not only in the open that this threatening backdrop is being erected. Troops of plainclothes policemen blend in with the daily crowds lining İstiklâl Caddesi, Istanbul’s most famous avenue. The population are being kept on a short leash. Freedom of assembly and expression cannot be taken for granted in Turkey. Nor can the unrestricted flow of information over the internet.

Many saw the municipal election in March as the decisive test for the presidential election. Erdoğan’s AKP achieved a great triumph, obtaining almost 50% of the votes cast. But what about the other 50% or so of voters? Many of them sympathise with the Gezi Park protesters or fought on the street themselves for a free and open Turkey. Nevertheless, even such a powerful movement has been unable to spawn a strong front against Erdoğan’s AKP. When you speak to people about the protests of the last year, their stories are full of pride and you can sense the pleasure they take in remembering them. In spite of all the hardship and violence, they showed the world that Erdoğan does not, by any means, represent the whole of Turkey. The most diverse factions united under the banner of the Occupy Gezi movement. People realised that they were able to fight for their opinions and ideals. However, a clear, united front against Erdoğan was not able to grow out of the protests.

Erdoğan’s strength lies in the weakness of his political opponents. His main rival is Ekmeleddin İhsanoğlu, scientific historian and joint candidate of the Kemalist Republican People’s Party (CHP) and the Nationalist Movement Party (MHP). He does not, however, have a very enthusiastic following in the social democratic CHP base, particularly among Alevis.

So far, the election’s rising star has been Selahattin Demirtaş, the left-wing People’s Democratic Party (HDP) candidate. The Kurdish lawyer sees himself as the representative of a camp separate from the nationalist and religious parties. Demirtaş professes to give a voice to the excluded minorities – Kurds, Alevis, women, the labour movement and homosexuals. He cycles to his campaign appearances and appears in public with his family – a novelty in Turkey. What are his chances in the election? Very slim.

There is little evidence of the election in Ataşehir. Only on one 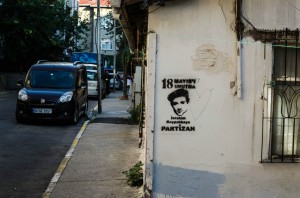 occasion do I see a stand promoting Selahattin Demirtaş’ party. Three elderly ladies, armed with microphones, sing and dance on a small street corner and hand out leaflets. The local residents’ enthusiasm is limited; hardly anyone takes notice of the stand or engages in conversation. I see the odd isolated election poster. In contrast, the area abounds with posters depicting Hasan Ferit Gedik, a member of the Occupy Gezi movement who was shot after a demonstration on 29th September 2013.

There is not a sign of Erdoğan’s AKP. On the Sunday a week before the election, Erdoğan has a campaign appearance in Istanbul – on the other side of the city, of course. On its way there, an AKP bus crosses the neighbourhood; bottles fly. That is how the inhabitants of Ataşehir feel about their Prime Minister. On the same evening, the Gazi area of Istanbul, primarily populated by Alevis and Kurds, is attacked. There is serious rioting and severe injuries are sustained. Are there any public reports? Not one. Bad press would not be desirable with the election coming up so soon.

All our worst fears are soon confirmed on the day of the election. In the first polls, Erdoğan is already a long way ahead. For the very first 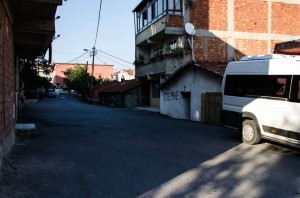 time, 53 million Turks are entitled to elect their President directly. Over half of the people who make their way to the ballot box give their votes to Recep Tayyip Erdoğan. In the past, it was often said that Erdoğan pursued a secret agenda. In actual fact, his agenda is not secret at all. Erdoğan takes every opportunity to assert his intention of creating a conservative Islamic society. More power for the President, less freedom for the population – that is the direction Turkey is heading in.

At 19:01, it is official. Bekir Bozdağ, the Minister of Justice, declares Recep Tayyip Erdoğan the winner of the presidential election.

Thus, Turkey moves towards a divided future. Half of the country stands firmly behind its Premier, the other half distances itself ever further from him. A third bridge over the Bosporus is currently under construction, to link the European and Asian sides. Among the Turkish population, however, such a link is missing.

Text and pictures: Christian Stahl
Translation from the german contributed by nchomeldoe at trommons.org