Violence was provoked by police 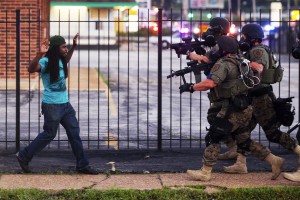 Joseph Sulier went to Ferguson, Missouri to take part in the protest after the killing of Michael Brown. „Mike Brown is NOT to be forgotten“, he says and talks about his experiences and thoughts about what happened during the last two weeks in the „American Police state“

Lower Class Magazine: What motivated you to go to Ferguson?

Joseph: I live in South St. Louis City, Ferguson is roughly a 15 minute drive from my apartment, my backyard essentially. I‘d like to make it very clear that I have not been in Ferguson every night of the protests so I don‘t wanna give the false impression that my opinion is more valid and comprehensive than those that have been putting their safety on the line every night of the struggle, those folks deserve to be commended for their committment, especially the people of Ferguson who have no option to retreat. That said, I have been there several times and, when not there, I have followed several live video feeds and live Twitter feeds simultaneously every single night of protests and feel like I have followed day and night as much as is humanly possible so I feel like I have a very informed perspective. What motivated me to go in the first place is that ALL of us, white or black, St. Louisan or elsewhere, have a responsibility to the people of Ferguson and to the black community in general to support this movement and the black community and to speak out against systematic police brutality and racism.

LCM: When did you arrive at Ferguson? Could you describe your first impressions of the protests?

Joseph: I first attended the protests on the Thursday after the day that Captain Johnson of the highway patrol was instated as head of operations which happened to be the ONLY night where violence wasn‘t aimed at protesters. My immediate impression was nothing but positive, within ten minutes of arriving at QT [the QuickTrip gas station in Ferguson was burned down during the first days of the protest and became a gathering point for demonstrators later; LCM]

a black woman approached me and asked „excuse me sir, are you white?“ to which I replied „Haha, lady I‘m about as white as they come“. She retorted with „Thank you for being here, we appreciate you being here“, then proceeded to introduce me to her girlfriend and their two daughters. I‘m assuming she asked if I was white in attempt to be sensitive in case I happened to be of mixed race which was wonderful. The atmosphere was very peaceful and almost jubilant filled with an incredibly diverse crowd of nearly a thousand protesters filling the streets in cars and on foot while the police presence was virtually non-existent which I think points to the fact that all of the violence has indeed been provoked and instigated by police action.

Joseph: Every single other night which has followed has shown clear police provocation, intimidation and instigation towards the protesters. They continue to claim that molotov cocktails, rocks, and even shots have been fired their way yet I have yet to see even ONE molotov cocktail or otherwise, the only things I‘ve seen lobbed at police have been plastic water bottles which obviously pose no threat whatsoever to an armada of heavily armed and heavily shielded police forces. I‘ve seen countless journalists assaulted and arrested simply for documenting the events, I‘ve seen protesters hit by rubber bullets, teargas, sound cannons, strobes and batons who didn‘t appear to be provoking them, I‘ve seen automatic weapons continue to be pointed directly at both peaceful civilians and journalists who did not pose any threat accompanied by verbal threats of violence and cursing. I have yet to see any protesters attack police save for the previously mentioned water bottles.

LCM: There where many reports about journalists being arrested or hindered by the police to do their work. Can you talk about this?

Joseph: One of the more terrifying developments to occur as of late has been the complete evacuation every night at some point of any and all media which we all know is a violation of the first amendment and illegal. Earlier on in the protests there weren‘t any real restrictions on where media could be or how long they could stay but now we have no idea what is happening after these journalists are removed from the scene. A couple of things we DO know is that at least once the police did a door to door sweep of neighborhoods in which they confiscated resident‘s guns, they‘ve also resorted to just gassing 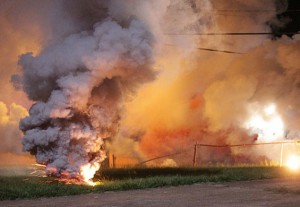 neighborhoods which abut the nearby protests but don‘t necessarily have any involvement. The police also, a few days ago, raided St. Mark‘s Missionary Church which has been collecting and distributing supplies for protesters and offering other types of support and it seems that they only confiscated Maalox supplies which is an anti teargas agent.

LCM: Can you try to describe who is actually on the streets? Which groups or organizations are taking part and are they playing a significant role?

Joseph: Its really pretty difficult to tell because it is such a diverse crowd. There is a lot of talk from the police and certain „civic leaders“ like Alderman Antonio French who have continually tried to blame „outside agitators“ for a lot of the violence but I really don‘t find that to be the case and I‘m not even sure what „outside agitator“ means in the first place. There have been fingers pointed at „white anarchists“ for provoking violence but again, I‘ve seen plenty of 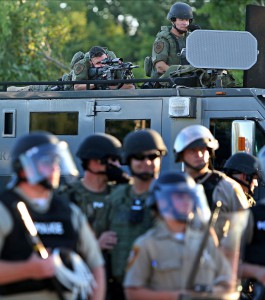 anarchists there but I have yet to see any of them engaged in any sort of „agitation“ or violence. Its a really unified group who all seem to share the common goal of illuminating the outrageous racism and brutality that occurs every day in this country at the hands of police. It seems to be an attempt, by police, to sort of divide and conquer and foment distrust among protesters which, unfortunately, has been successful, at least to a small degree.

LCM: Some mainstream media of course decided to focus on looting that happened. What are your thoughts on this?

Joseph: There HAS been looting to be sure but I honestly think that can be chalked up to teenagers being idiots and not really thinking rationally because, as we all know, teenagers are capable of some really ridiculous and horrible things simply because of the fact that they‘re teenagers and don‘t know any better or don‘t care to know any better. If I were to be held to the countless horrible things I‘ve done as a teenager I wouldn‘t have a very positive outlook from others, haha.
And along with the looters there have been even more from the community stepping in to guard these places from looters because the police have continually sat back and watched these things occur 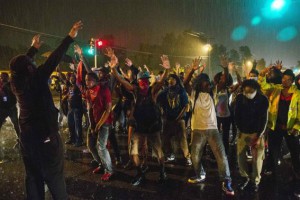 LCM: How was the killing of Kajieme Powell received by the protesters? In European media this incident was barely mentionend at all.

Joseph: Well the thing about it is that that occurred again in broad daylight only this time the scene was surrounded by witnesses who were filming. I haven‘t watched the video because I personally think it distasteful to watch or share the murder of a human being. It certainly resulted almost immediately in further protest and its just sort of absurd at this point, it‘s hard to really fathom what the logic of any of this is anymore. How far can they possibly continue to push this community, or the country in general?

LCM: What is your answer on the question you just brought up? How far can they possibly continue to push the country? What is your conclusion of what happened during the last two weeks?

Joseph: The only thing that can really be said is that there is a long fight ahead, and not to be forgotten is that Mike Brown is NOT to be forgotten, he was an unarmed human being executed in a way that would almost never occur to a white person under the same 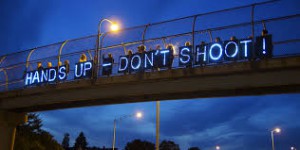 circumstances. The U.S. is not only heavily militarized on domestic soil but is also occupying other nations consistently. I toured Europe earlier in the year and spent a handful of that time in Germany and Austria and I think I could honestly count on one hand the amount of police I encountered, it was difficult to step back into the reality of the American Police state.

I’m now not certain where you are getting your info,
however good topic. I must spend some time studying much more or
understanding more. Thank you for magnificent information I was in search
of this info for my mission.