The three letters raising hope are not “USA” but “YPG”

A contribution to the debate on the shipment of arms to Iraq. 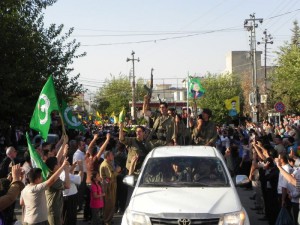 These days that everybody is talking about it from Spiegel to CDU, the majority of the german left realizes: Oops, in Syria and Iraq, there are Kurds. And, oops again, there are islamistic militias. So far, solidarity with Kurds and support for Kurdistan used to be the issue of only a few hundred people in the whole country, who have been considered at least “weird” for their field of activism by most and were told again and again and again by an oh-so-correct-emancipatory vanguard they were supporting nothing but “nationalist” reactionaries – a.k.a. PKK. But now, under the impression of massmedia coverage, also those start an interest in the topic, who keep jumping from one ideological projection screen to the next.

So now it’s Iraq, since Ohlauer Straße went boring when the spectacle faded out. But because one likes to “appeal” to which institution or people ever one believes they would be able to achieve something while oneself is incapable of doing anything at all, and because one is used to keep thinking in patterns that are state- and capital-compliant, there is just one, really great idea: the demand to ship arms to the Kurds.

It only requires a minimal effort to ask yourself the question to whom these arms would be shipped. Would these arms be shipped to the internationally branded “terrorist organization” PKK or her ally YPG? Or would these arms rather be shipped to the local representatives of the West, the corrupt clans in Bagdad and Mesud Barzani’S KDP, the party dominating the Kurdish regions in Iraq?
The guru of those, to whom Kurds are not much more than another opportunity to paint their US-fetishism in leftist colours, says: “There is a moral obligation and political necessity for everyone, to help the Kurds in their fight against the jihadists. But the Kurds do not cherish any hope for military aid from Germany or Europe. Their hope is called USA, once again.” (Denis Yücel, taz)
“The Kurds,” those words he, of course, did not chose unintentionally, considering their squishiness. The West is not starting to support those Kurds who are not members of the western cohort like Barzani and people like him. Quite the contrary: PKK and YPG are not demanding shipment of arms, they only speak in favor of humanitarian aid. The only one repeatedly calling on Washington to send weapons of war is Mesud Barzani, who is under suspicion by not only a few people of having pulled back his Peshmergas only to back up this demand.

So far only the US and France have announced to ship arms to “the Kurds of northern Iraq” (which of course means Barzani’s KDP) and the “gouvernment of Iraq”. The last one is a joke anyway. Besides the fact that the Al-Maliki administration has had a big share in the process that Sunnis in Iraq went through to develop the idea of tolerance towards former rappers and professional lunatics from Germany and Chechnya in their cities, this gouvernment is highly repressive, incites religious hatred and is corrupt up to a level that nobody can possibly tell where exactly these arms will end up. Even if they will make their way to that rifle club also known as “Army of Iraq”, considering the level of disorganization there, these weapons will most probably not be contributing to a serious debilitation of IS. There’s even more to it: The moment IS conquers their emplacements, these weapons will end up with IS. So it’s a stupid idea.

But as a leftist you also can’t support any shipment of arms to Barzani. Even the Tagesspiegel knows: “The autonomnous gouvernment of the Kurds of northern Iraq does tolerate the heavily armed kinsmen of the stalinist-like organized PKK, but actually wants to get rid of them. Mesud Barzani, president of the Kurdish autonomnous gouvernment in northern Iraq, and PKK-leader Abdullah Öcalan, currently imprisoned in Turkey, have been rivals in leadership of all Kurds for a long time. Also the Syrian PKK-subsidiary PYD used to give Barzani the creeps. Only lately, in spring this year, Barzani’s people, the PKK and PYD experienced serious tensions.” After solving the IS-problem, Barzani, acting in friendship with Erdogan, would definately use exactly those weapons leftists support to be shipped to him now, use against the only ones in the region that possibly can be supported from a leftist point of view: PKK and YPG.

And air strikes? Though thourougly celebrated by those whose greatest wish it is to prove that the USA are acting on grounds of charity, altruism and in support of human rights, these are nothing but means serving the interest of Washington. This means they are nothing more but the continuation of exactly that kind of politics that made Iraq resemble the failed state from Mad Max as much as it does now. It is impossible to “vanquish” IS anyway. The more the accursed USA intervene, the more Sunnis will join IS. Does one have to “reject” the air strikes because of that? The answer to this is pretty irrelevant, for they will be carried out even though we might reject it. The Kurdish liberation movement though can take advantage of them wherever it is possible, just the way you should take advantage of the contradictions imminent to imperalistic politics in favour of your own goals. Lenin did take the sealed train to Russia.

So does that mean one is supposed to do nothing and by doing so become guilty as well, like Evrim Sommer (Die Linke) is insinuating those do, who do not beg for military aid? Of course not. There’s plenty of options. Those who like to “demand” and sign “petitions” could demand the complete abolition of shipment of arms instead of favouring one particular shipment. Or demand sanctioning states that support IS, like Turkey or Saudi-Arabia (there is way too little discussion about Turkey and it’s involvement in international Jihadism anyway, besides some half-hearted statements made by members of Linkspartei). Revocation of the ban of PKK could be another step. At least supporting those who are fighting back IS would no longer be a crime. Also one can make contact with local Kurdish structures in exile and support solidarity efforts by one’s own means, instead “demanding” shipment of arms to Barzani on grounds of sluggishness and moral duty and continuing the life of a couch potato. Those who feel this is not enough can find their inspiration among the international brigades. Wonderful comrades have done so again and again, just think of Andrea Wolf.

In a nutshell: rejecting the demand for shipment of arms is not demanding to do “nothing”. It’s the exact opposite of this. Hope for the people living in the region is not called “USA” but YPG and PKK.

– by Fatty McDirty / translated from german by anonymus