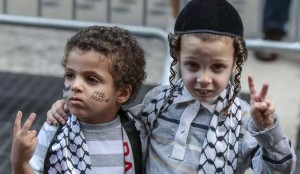 The current discussions about the israel-palestine issue seem to revolve around the arguments about antisemitism, islamophobia, the same old “self-defence” discourse, the holy anti’d pact, and never endless references to the other side’s racism to the point we get blind. This is indeed the result of the elaborate media indoctrination which frames the ‘conflict’ as an international conflict, “two-sides exchanging fire”, “terrorists”, without putting forth the context of the last 70 years.

I can find hundred examples of pro-Palestinian stance which has elements of anti-Semitism. I can as well easily find hundred other examples of pro-Israel stance which has anti-Arab or islamophobic elements, but where does this lead us exactly? What does it help besides feeding the vicious cycle of racism or violence? Racism just feeds racism, not one form is not nicer than the other. Perhaps it is also worthwhile to see that the anti-Semitist or anti-Arab focus is being brought up over and over by those who want to undermine the solidarity campaigns on both sides, or pretty much in a very indecent way by using it as an apology for Israeli state’s violence. We should constantly confront these people, as well as those right extremists on both sides making hatred speech.

Obviously, in the land of Holocaust, if you criticize Israel’s actions, you are automatically labeled as an anti-Semitic or a Hamas supporter. I got that so far. Palestinians seem to be the hostages of the Holocaust.

Let me tell you my side of the story. Personally, it feels very depressing here to hear only one side of the story being dominant. One has to be blind not to see that in Germany. This means, the mainstream media is mainly talking about the terrorists and Israel’s right to self-defense. This means, any person that you’ll run into will most probably mirror this discourse (as is my experience here so far). This means, the government is supporting it, i.e. aunt Merkel explicitly siding with Israel, sending weapons in this conflict-zone. Can you imagine how repugnant this collective stance feels for me as a non-German? Sorry, but to be frank, it feels like this: “Oh well, German people siding with their government on a genocide again”. Not to mention how the “Israel-solidarity” atmosphere here in some “left” circles is not really able to differentiate itself from the neo-fascist scene now incubating in Israel, or not reflect any similarities of the left or peace activists of Israel or elsewhere in the world. It probably gives you the goose bumps to see anti-Semitic elements in the pro-Palestinian side, as it does to me – but it scares me more and makes me more angry not being able to witness any collective clear stance against Israel’s actions.

Israel as an exceptional state

For 70 years, Palestinians are demanding for their right to live as free as independent people. Is people’s (even on the left) only agenda here to protect the rights of only Jewish people, or all people? Israel is not the first state, and won’t be the last, to put forth the reason of “security” to justify state atrocities and control. Agamben states, “states use the formula ‘for security reasons’ functions today in any domain, from everyday life to international conflicts, as a code word in order to impose measures that the people have no reason to accept.” (1) Then he goes on to discuss the genealogy of security, tracing it back to the regimes which proclaimed state of emergency and suspended personal liberties in their constitutions to justify state power and control, and how the state of exception is now becoming in Western democracies a normal system of government.

Today, one can easily discuss about the current situation of Israel within this context (especially with Israel’s transfigured image in Germany); with Israel’s ‘right’ to expand and practice its military powers for committing crimes that are easily identified with “war crimes” and not be recognized as one due to its imposition of its exceptional condition obviously, and its constant propaganda of using extremist elements in the opposition to justify collective punishment, humiliation, discrimination and an insistence on the rejection of recognizing people’s right to live as free people in their homeland.

I’d rather bomb 1.7 million civilian population than talk with you

Let us state the facts and trace the problem back to the right source, see if we are on the same page, and make sure we only move on from there: Israel neither has an existential threat to defend itself, considering that it is one of the strongest military powers in the world which is also backed by the unconditional support of superpowers; or the moral high ground, facing the fact that 5.4 million Palestinians today live in exile as refuges with no home, or in Gaza strip which is recognized as the biggest open air prison in the world blocked by Egypt and Israel, or in what we now define as an apartheid regime in the West bank, or elsewhere in Israel as third class citizens having to face Israel’s institutionalized racism every day.

We should start by asking why Israel cannot help in creation of one state with Palestinians in which each individual has equal rights (do I hear “because they are terrorists!!!?” already? okay, then we can move on). Rather than keeping on pointing to the extremist elements to bomb civilian populations, and now a ground invasion which already caused death over 500 people, Israel should also be aware and be reminded of its own extremist elements – whether it be in discourse echoed in Israel’s parliament regarding the Gaza population as terrorists or snakes, the unacceptable apartheid regime, or its ultra-asymmetrical terror against the Gaza population. Not to mention Israel’s don’t-give-a-shit policy in expanding illegal settlements or its great efforts to undermine the peace negotiations in the past, which lies at the very core of this problem. President Netanyahu made it clear on the fourth day of military operations at a press conference that he will never recognize a full sovereign state in the West Bank, while he is also known to be opposed to a bi-national state solution in the past which includes Palestinians (2). One obvious goal of the Israeli state seems to be the rejection of a Palestinian state, with or without the jihadists.

Say it loud, say it clear, cheap debates are not welcome here

Israel’s actions against the Palestinians will only be marked in history when world opinion turn against them, as was the case in the end in South Africa. Looking at the mainstream media here is enough to make anyone who doesn’t have any insight on the issue think “terrorists are attacking Israel so they’re defending themselves”. Our mission here starts with exposing the facts first, rather than imposing our double standards. Then, we should hear and help raise the left voices on both sides, rather than letting us drown into mumbo jumbo.

It seems to me that the most important duty of left here is to find another language of tackling with the issue rather than going into endless discussions about racism on either side, or cheap debates on terrorism. We are against injustice, inequality, racism, sexism, homophobia, and dehumanization of a population under any circumstance, and we should stand against Israel’s genocide in the Gaza Strip. There is no issue that security that can serve as a rationale for the punishment of an entire population, or for the constant degrading and humiliating treatment inflicted on the Palestinians.

Our aim should be to stand against the occupation and war, and to 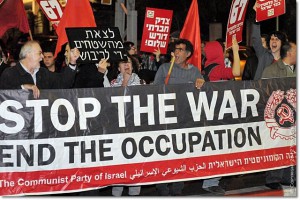 demand on a one-state solution in Palestine where Arabs, Jews and Christians live together with equal rights as free and independent people. There is simply no reason to believe why this cannot be achieved.

I agree on a lot of parts, but I find the term “genocide” and in consequence the comparision with the holocaust heavily biased. In which way does Israels occupation of palestinian territory or bombardement of Gaza constitute a genocide? I frankly do not see that happening.

Genocide in Gaza, Ethnic Cleansing in the West Bank
http://electronicintifada.net/content/palestine-2007-genocide-gaza-ethnic-cleansing-west-bank/6673