“Now we are visible” 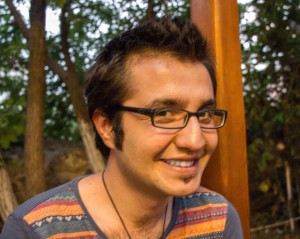 We have met with Yildiz Tar, journalist, author of the book „comrade I am a faggot“ and since eight years part of the struggle of the lesbian, gay, bisexual and transgender movement. Also it* is a  editor of the magazine and website of KAOS GL (a anarchist oriented LGBT rights organization founded in 1994). It is part of Lamdaistanbul (a socialist oriented LGBT rights organization founded in 1993 when the governor of Istanbul forbid Christopher street day).
Yildiz was working for Etkin, a socialist news-agency in Istanbul, during the Gezi-uprising and now doing it’s main work with KAOS GL.
The KAOS GL magazine is published quarterly and sold for five Lira and read by about 5000 people. The website is the first and only source for daily news of the LGBT society and tries to establish an archive of the Turkish LGBT movement. It also records the hate-crimes against LGBT’s.
KAOS GL celebrates its 20th birthday, so the movement has quite some history. Would you like to give me a historical walk through of the movement?
Well, this is my personal view, not the official one. I believe that the movement started before the military coup in the 80’s because already then there were transgender women organizing and trying to resist. During the coup there was torture of transgender women. We all heard of the story’s of how the state oppressed the revolutionaries and how the state oppressed the Kurds but nobody has heard the stories of transwomen. They where systematically tortured. The military used special methods, for example putting transwomen in a big bag together with a cat, they would beat the cat so it would just scratch of the faces. On other occations the transwomen were taken out of the cities by train and just pushed out in rural areas to be eaten by wild animals.
I believe that the LGBT movement in Turkey started with that resistance, with that violence against transwomen.
Officially it started with KAOS GL from Ankara 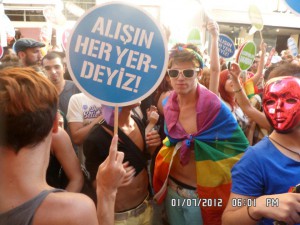 and lamdaistanbul.
In 1994 the magazine was published first.
At this time it was an illegal magazine and was photocopied at different places in the city and was hidden between books at private houses. After its legalization it had to be published with a pre-note that it „was not suitable for general use and may affect children.“ Since 2008 we came out of that, and over the last eight years other organizations started forming, like „pinklife“ in Ankara or Istanbul-LGBT, but also in Izmir and Dyabakir. In the last five years in over 30 cities all over Turkey and Kurdistan LGBT organizations where founded.
With Gezi we saw a huge turning-point for the LGBT movement, you see after Gezi LGBT organization started forming in every city, like in every city there was a rainbow flag and they began just to emerge from that cities ẃhich speed up the adventure of the LGBT struggle and identity. Many people say now that the movement started with Gezi, I hate that because its not the truth. We talk about really serious stuff during the history of the movement, there has been a lot of pain but also a lot of joy on the way of trying to say „We are here!“.
Gezi was a speedup process but not the start of everything.
Even though Gezi wasn’t the start of the movement, it was a huge catalyst, what where the affects for the movement?
It grew a lot and new organizations were founded the whole LGBT society became much stronger.
We became more visible by mainstream media, everyone had to realize this fact: there is a reality that lesbian, gay, bisexual and transgender people are here, like it or not! Until that we said „We are here!“ we tried to become visible and with Gezi this phase of our struggle has successfully finished. From now on we struggle for our rights and for liberation in an more radical, queer and maybe anarchist way of liberating our selfs and liberating the world. So thats the next step.
Also let me give you a metaphor that I always use talking about Gezi.
All groups had build up some walls around them, like a comfortable homes, and we where working from our homes to other homes like in a neighborhood were you yell from one window to another.
With Gezi we just destroyed all the walls, we destroyed all the „houses“. We shared our experiences and our way of living with all the groups and they shared with us.
Did Gezi also affect the way the government thinks and acts about the LGBT struggle and its people?
We see the signs, but i can not talk very certainly about that.
Before Gezi we were like some unwanted children to the government. The state didn’t want us but the society did the work for the state by hate-murders.
The state didn’t need to try to kill us or to destroy our struggle because there was this huge social hate and many hate-murders. They were killing us and nobody cared.
During and after Gezi the state came to see the potential of the LGBT movement and started seeing us as an unwanted movement which it has to fight. For example there is a LGBT prison-project of the government. The government has gone crazy and said that they will have a separate prison for LGBT prisoners. They said that in mixed prisons there is rape and other unwanted behavior towards LGBT’s and that it is for protection. This is obviously a lie. The transgender prisoners get raped by the prison-guards. One of our comrades was raped five times in five different prisons by prison-guards. She has gone on hunger-strike for 70 days and only by that she managed to stop the rapes. Now her hunger-strike is over but her body suffers from Korsakoff-Syndrome**. So protecting the prisoners is not the goal. If the Turkish government builds a prison it means „we will take you to the prison!“, we can also see this at the Kurdish and socialist movements with the F-Type prisons.
We try to prepare for this attacks now, but it is not certain if and when they start. The situation is really random nowadays in Turkey. It’s like Marx’ famous words „everything that is old melts into air.“ becoming reality here.
Am i correct that before the transgender prisons are build, LGBT prisoners are sent to regular men prisons?
No. Transwomen would get isolated from other prisoners and were imprisoned neither with the women nor with the men. If you are gay and come out and say „I am gay“ you get isolated, too. If you don’t say anything, nothing happens. Now they want to take all the LGBT prisoners into one prison. This is their project right now, and we don’t know any details e.g. if they are going to build a new prison or simply empty one and declare it a LGBT prison.
How is the acceptance of the LGBT movement among other left-wing organizations and movements and how did it change through Gezi? 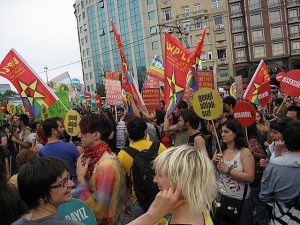 As an anarchist-communist I have always been part of socialist parties or Kurdish movements. This is maybe about my personal story, too. Ten years ago I couldn’t say that I am queer, when I did so they just kicked me out. Five years ago though a big organization, the coalition of Kurdish and socialist movements (HDP) was founded and I was part of that. With Gezi it changed. I actually wrote a book about it: „Comrade I’m a Faggot“. I interviewed the leaders or spokespersons of different socialist parties and asked them what changed for them with Gezi. There was changes because of Gezi but also some ideas stayed solid. Basically they except LGBT as an important struggle but don’t know what to do about it. Before Gezi they didn’t think of it as important issue because they thought that the people of turkey won’t understand this reality, and that it was to early for an LGBT movement.
Obviously this point of view was destroyed during Gezi.
On the other hand there hasn’t been this huge enlightenment and getting rid of homophobia. There is  homophobia and transphobia in the revolutionary movements but there is hope for the leftist movement to change. Also the leftist movement is not an homogeneous group. There is conservative groups that say that homosexuality is the perversion of the bourgeois society and can be treated as an illness, and even thought they probably wouldn’t agree with me right now but they are also changing. But there are also organizations that accept LGBT as part of the revolutionary anti-capitalist struggle. These are the two different edges of acceptance of the LGBT issue in the leftist movements.
How about the general social acceptance of the LGBT struggle?
Well, there is no general acceptance. But before Gezi the people had the luxury of just pretending not to see us. Now that we have become visible they have to take position for or against LGBT. So the boundaries were sharpened. The conservative and nationalist forces started saying that they don’t want LGBT and other more progressive organizations stated that they do want to support LGBT. The situation became more clear in a sense. Now we are visible. Our struggle found it’s way into the mainstream media and daily politics, which is an important thing for a social movement. It means that from now on we aren’t only subjected to them, we get to state our position and people have to react which means a lot and it’s a success for us.
Thank you very much for your time.
*Since Yildiz feels neither as a men nor a woman, it asked us to address him as “it”.

**a neurological disorder: due to the malnutrition of the body; symptoms are: severe memory loss [retrograde and anterogade amnesia], apathy, confabulation, minimal content in conversations