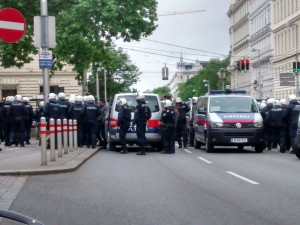 demonstrations has become to some kind of quarterly routine. After using truncheons and pepper gas against the protests around this years “Akademikerball” in the end of January, last Saturday was the second time this year that the cops attacked an antifascist demonstration with completely disproportionate means.
The “Identitarians” -the newest try of right-wing dumb-asses to maneuver in the middle of society by means of respectable appearance- wanted to march through Vienna. Approximately 50-70 fascists followed their call, with most of them coming from abroad. The mobilization of the “movement”  invented in France was rather small in Austria.
For this exact reason the self-styled “patriots” were depending on the support by the uniformed. Against their small and miserable gathering stood about 1000 antifascists who didn’t want to allow them to march through Vienna. But policemen by the hundreds took care of them so the fascists could carry out their demonstrations. Blockades by the protesters were brutally attacked by the police, pepper-gas was used as if it were a toy rather than a chemical weapon, and of course their truncheons didn’t stay unused also.
Still the antifascists managed to at least disturb the “identitarian” mummery, the route had to be changed by the police, the fascists had to hide behind the police for hours. After finishing Saturday’s disturbing of peace, the right wing mob went to eat at “Centimeter” in Josefstadt, and who watched over them so nothing would happen to them?  Cops from Vienna. 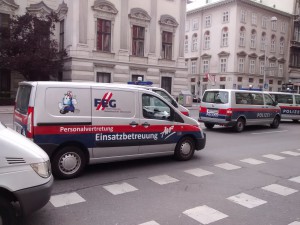 Meanwhile their colleagues staged a coursing of antifascists. At least 37 people where detained, five women were hurt. One person is still imprisoned. One protester has a twice-broken leg and has to stay in the hospital, a friend that wanted to help her was also arrested. One of those detained claimed to be pregnant – comment of the police: “If you oppose the police you have to fear consequences, even if you are pregnant.” Apparently “opposing the police” is just a new phrase for “attending a antifascist demonstration.” 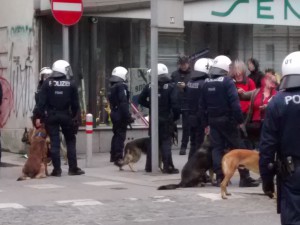 But this time the police didn’t only bring cynicism and pepper-gas, they brought a very special surprise: a dog squadron. With yapping hounds, encircled protesters were intimidated, even though they had done nothing illegal.
The goal of the savage troops of Gerhard Pürstl, the chief of police of the social democratic & green governed city of Vienna, was obvious: Intimidate protest by any means necessary. If you have to use trained hounds against peaceful protesters, you use trained hounds against peaceful protesters.
-by Karl Schmal 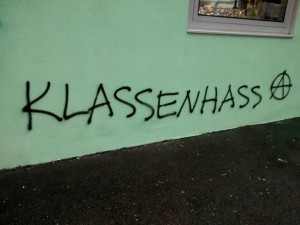