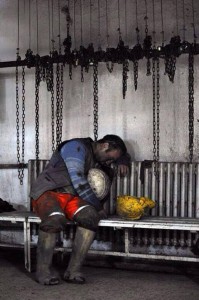 Hundreds of workers died due to a technical fault in a coal-mine in Turkey. The left-wing movement is calling it a “massacre”

Soma, a little town in western Turkey, has a population of about 10, 000 and a coal mine. The latter is operated by Soma Holding, whose CEO Alp Gürkan is close to the governing AKP. The group recently implemented ongoing cost-saving measures, and praised itself for massively reducing the price of coal. A safety-check demanded by the CHP opposition was denied a few weeks ago by Erdogans’ AKP, and so the inevitable happened: after a “technical fault”, the death toll is currently 298 workers, but the number keeps rising and more than 100 workers are still missing. Numbered among the dead is a 15-year old boy who was working in the mine.

However, Premier Erdogan has stressed that industrial accidents are “normal” and happen everywhere, all the time: “If we look into 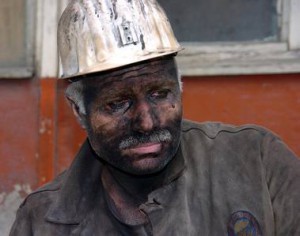 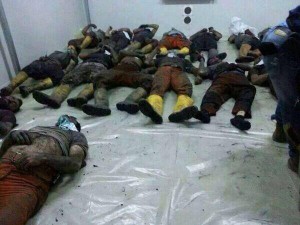 Turkey has a reputation as a country of “industrial accidents”. Unions, left-wing activists, and revolutionaries see the dead as victims of a systematic “murder”.  This is not unreasonable. The neo-liberal accumulation of capital in Turkey is based on accelerated exploitation of the workers. Low wages, no rights, fucked up working conditions – all part of everyday life. For the companies it simply doesn’t matter if there are accidents. They willingly take the risk as long as there are profits.

In this respect, the protest movement forming in the wake of Soma 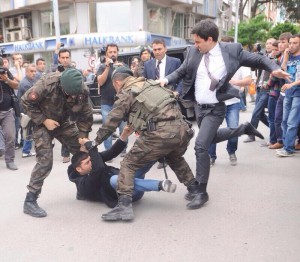 has adopted the phrase “Kader degil, katliam”  – “Not fate, but massacre” as its central slogan. Erdogan’s government reacted to the nascent protests as per usual: with massive violence. Even in Soma, a village usually not known for its revolutionary spirit, clashes started after the Premier held his speech and the picture of Erdogan’s advisor, Yusuf Yerkel, kicking a mourning person went viral. The first demonstrations in Ankara and Istanbul have been attacked with teargas as usual.