[Istanbul Diaries VII] Turkish police and the freedom of press 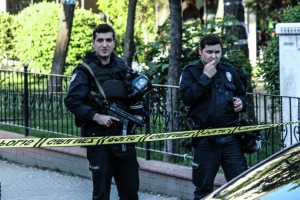 We were not the only journalists, being in Istanbul around the first of May. Some friends of us from Frankfurt have also been there to shoot a video-documentary. This again, was not liked to much by Erdogans bloodhounds, and so they became the target of the civilian police. We are documenting the memory protocol of our comrades.

The first of May started for us early at 26th of April 2014. After the Geziprotests we traveled again to Istanbul to shoot a documentary about the influence which the Geziprotests had on the Turkish society. As a part of this, we have made some appointments for interviews with different people. Be it IHD (human rights association), CHD(lawyers), unions (DISK and KESK), journalists, parties like BDP, HDP, CHP, TGB- and of course also the revolutionary groups.

Already at day two or three of our stay we noticed that we were under surveillance. We weren’t surprised by this, since we have made the same experience during the Geziuprising. We wanted to meet with a lawyer at the vivid street Istikal Caddesi for an interview on the 29th of April. We were a little over punctual so we had to wait. Shortly after we were addressed by a group of four people who asked us how we were and how we liked Istanbul. We noticed right away that something was wrong. Some friends from Gazi told us that, if time goes by, you are starting to get an eye for civil cops which was actually the case. Accordingly we answered very evasive, and they told us right away that we shouldn’t cause any trouble and get up to follow them. To the question what the problem was, the civil cops (which still didn’t show us any badges or officially showed themselves as policemen) told us we knew very well what all of this is about. They grabbed us by our arms, and took our bags. Thereupon we yelled to the people in our close environment that we are journalists from Germany and that we are taken without any reason. Thereafter a crowd gathered, but it was to late we were already sitting in the police car. From inside the car we saw people taking pictures and calling people. As it turned out afterward, they were calling the IHD.

Inside the car noone talked to us. We were bewildered by there calmness. They took our cellphones and our camera equipment. When we arrived at the Station in Tarlabasi street we were pulled out of the car, and carried inside. Then they took our ID’s and Passports. They still didn’t tell us the reason for the whole operation, even though we asked. Now that we were far away from the eyes of peasants the intonation and the treatment became more rough. They 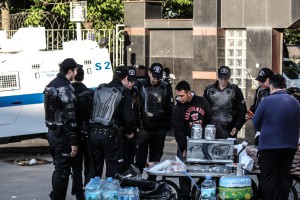 yelled at us and slapped our faces. A colleague of us was kicked by a officer. Now we tried to defend ourselves and prevent them to carry us into the interrogation room, which was quite hard. Inside the interrogation room they started asking questions: why we are here, why we have met with all those people. Obviously they were following us all the time since they were naming all the times and places. We said that we are journalists from foreign countries, and that we were meeting up with different people, organizations and parties for a documentary that we were shooting. We insisted on a lawyer respectively a phone call. Both was denied. As a result we decided to say not one more word. Either we get a lawyer or nothing! A officer smirked at us, and said that it is to bad that we missed the appointment with the lawyer now would have to do without it.

We were offered a cay, which we strictly rejected. The cop commented this as following: “Typical leftists. Never take anything from your enemy.” We had to wait. They asked us questions over and over again, which we didn’t answer. We said that we wouldn’t say anything before we could call our lawyers, and that this was a attack on journalism itself. This continued for about one and a half hour. After the endless questionings they accused us of being foreign leftists or partly in contact with left wing structures in Turkey, and that we were agent provocateurs.

Shortly after, they started asking political questions. Our position to Gezi, the AKP, the kurds, the revolutionary left wing, and so on. We noticed that a.) we haven’t been divided (my colleague and me) which we expected to happen, and b.) we were asked questions concerning our interviews. This showed us that our recordings (or at least the rest that was on the hard drive) has been screened, and that the people we recorded might be endangered. Since they expressed critical opinions.

When we confronted the cops that it is against the law, that they relate to our recordings they answered “What law? What are you talking about?”

Now we had to screen the material together with the cops only to be told that we were not getting it back. We insisted on getting it back since this was a violation of the freedom of press, and it hasn’t even 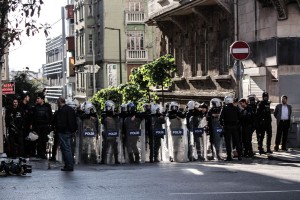 been logged. After we said this they started pushing us again. They grabbed us and beat us up. After the situation had calmed down, and we thought that we would have to stay there for at least a week there was an unexpected twist. We were told that there is no need for excitement, and that we were allowed to leave now. They handed over our equipment and cellphones. We controlled them only to noticed that our recordings were gone. Deleted! Again we complained and started discussing, again they yelled at us and pushed us outside and said :”if you don’t want to stay for some more days you leave now!”

Now we stood outside, free indeed, at least not arrested, but our recordings were gone. We put those on the tapes up to date.

We portrayed this incident to a lawyer we know, and are yet waiting for an answer. But he already told us that it’s going to be hard to do anything against this treatment since we had no protocol or anything else, not even note by the police. We understood that it wasn’t about us, it was about the people that sat down with us and talked to us. We understood that the Turkish government is scared. It was no demonstration of power by the AKP-government, it was their anxiety expressed by there brutality and repression. If there was something that we noticed in those eight days we have been there, it was that there has been a hell of a lot changes in Turkey. Since Gezi the fear of the people has vanished.