Resistance and loathing after the Soma Massacre

It is now been four days after the Soma disaster, as the number of dead has rose to 292 (1). Turkey, yet again, has become the site of riots and demonstrations. While the unions made calls for a strike, coal workers all around the country were marching the streets, and thousands of people have again taken the streets in Istanbul, Tarsus, Izmir, Adana, Samsun and some districts of Istanbul where riots still continue such as Kadikoy, Taksim, Gazi Mahallesi.

The movement now also seems to have another turn, as people with real guns have taken the streets in Gazi. One surprising development, as university occupations have never been that common in Turkey, has been that the students have now occupied the universities of Istanbul Technical University, Mimar Sinan University and Galatasaray University.

“Murder, not accident. Massacre, not fate”

The academia, of course, was nicely doing its job as usual by polishing the image of capitalistic establishments. Before the catastrophe has

happened, Istanbul Technical University was collaborating with the Soma Company and polishing the company’s name by providing them technical support, and therefore the “authority”. The declaration from the students from Istanbul Technical University read “We don’t want people in our university providing guidance for greedy capitalists and murderers under the name of ‘university-industry cooperation’, and we don’t recognize justifications from our rectors deeming this murder as a matter of ‘fate’” (2). They also declared that the occupation would continue until the faculty puts an end to all engagements with the company, and that Orhan Kural, who was in charge of the relations with this company, resigns, all the police attacks stop and all the responsible people of this murder get arrested.

All accumulation by means of workers’ lives should be confiscated 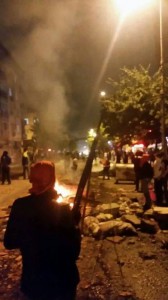 Lawyers from Izmir Bar Association has already filed an official complaint, claiming that although the disaster was expected, the authorities had not taken any precautions against it (3). This, in criminal law, is considered to be a deliberate act for murder. They demanded the arrest of all suspects in this neglect, and stated that all accumulation gained through not taking the necessary precautions to raise the profits by exploiting workers should be confiscated.

Take part in the demonstrations, and we fire you

Meanwhile, police continued the attacks on people in Soma, who just lost their family members and who are on the streets to voice their discontent (4). After Erdogan visited the site and helped police by punching a couple of people, tens of people were already detained, and mine workers of the same company received a text message on their mobiles reading “Everyone has to stay in their site, do not gather in groups and don’t take part in the demonstrations, otherwise you will be fired”. This, perhaps, seems like a joke, but under the AKP government these now have become customs. A woman in Soma was stating to BBC cameras (5): “They force us to vote for AKP. They say if we don’t vote for them, they will fire us. This is how they intimidate people. Why do you think people voted for AKP? They were scared.”

After Gezi, nothing really ended on the streets of Turkey. As the 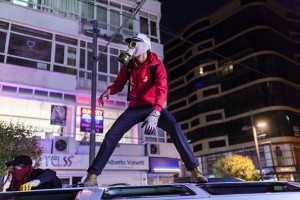 anniversary of the Gezi-uprising is also approaching on 31st of May, what is on everyone’s heart is to take the streets and make the movement as big, and this time more ‘sustainable’. The tension is still so high that anything is enough to get people onto streets, anyway. Turkey has always ranked one on top on the “accidents” in coal mines, but for the first time, even people who would see these “accidents” as fate now began uttering words like precariousness, capitalism, organizing, and so on. This tells us all that Gezi’s spectre is still dominating the atmosphere, and people will not sleep in peace until justice finds its place.