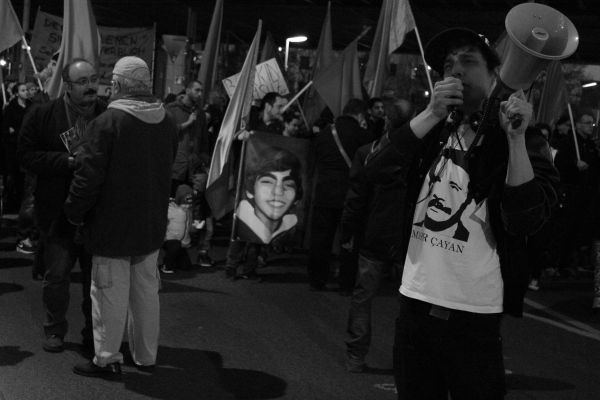 Berkin is not the only child victim of the Turkish state, he is actually 565. child that this state killed in the last 20 years, which can give you an idea about the long history of Turkey in killing children. But we only will think, talk, write, march and riot about Berkin today. Berkin Elvan died today after being in coma for 269 days. Actually it is wrong to say that he died. He was killed. He was on his way to the grocery store to get bread as he got shot by a gas canister on his head by police, during June protests in Istanbul, when the police was showering whole Turkey with gas canisters, water cannons, plastic and real bullets. He was only 14 years old. After he got into a coma he was named as ‘the child of hope’. Everyone thought Berkin would wake up some day. He was the child of hope, in the end. His name was on the walls of nearly all streets in Turkey, his face was on all the banners of all protests, asking him to wake up. Uyan Berkin. Berkin never woke up.

Berkin’s murderers are among us still. In fact, they were busy throwing gas canisters into the hospital that Berkin was staying this morning even. They were being as asshole as to attack the people who gathered for Berkin when his body was being carried to the institute of forensic medicine after his death. One police even aimed at the crowd of people with a real gun. The people do not even have the right to mourn in this country. 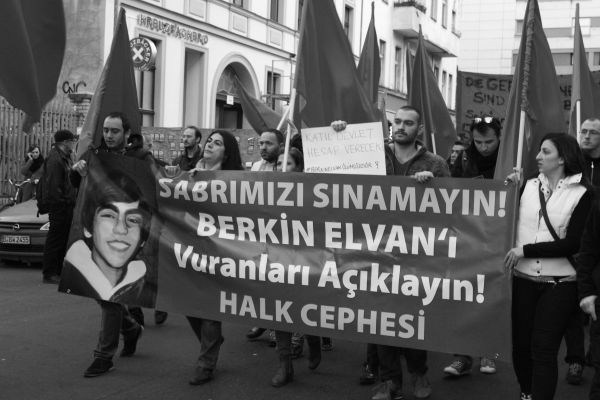 Nearly in all cities of Turkey, and some other cities (Paris, Hamburg, Berlin, Barcelona, Vienna etc.) internationally, people filled the streets today for Berkin. The protests were especially big in Besiktas, Kadıköy, Taksim in Istanbul, which are still going on as I am writing these lines. Over thousands of people are marching the streets of Kadıköy now, and one protestor there got shot in the head by a plastic bullet. In Mersin, two women got hit by a water cannon as they were trying to cross the street to escape from police attack. One of them is injured in the head, and her condition is claimed to be heavy.

People closed their shops today, putting notes on the doors saying they they are off for Berkin. Bar owners also made statements that there won’t be any music today but mourning for Berkin. Students were boycotting schools in Ankara, and sit ins were staged in other high schools of Istanbul.

Instead of the famous parole of the last weeks ‘thief Erdogan’, referring to the big corruption scandal in Turkey, demonstrators were chanting ‘murderer Erdogan’ today on streets. Erdogan, after Gezi protests started and some people already killed by police, made the statement ”I asked the police to clear the square (Taksim). I asked the police to clear Gezi park. People ask who gave the orders. I gave the orders to the police”. 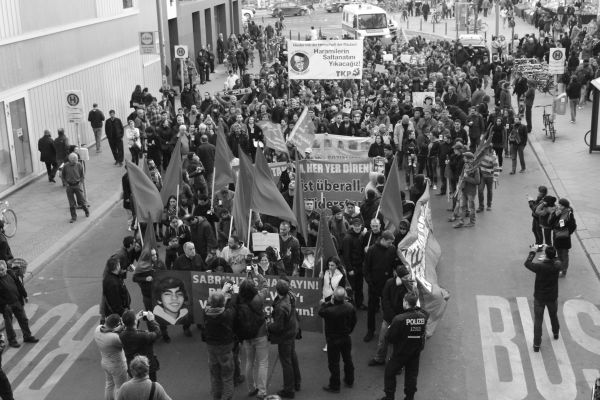 Meanwhile, the mayor of Ankara, probably one of the most inferior beings ever existed in this country, and one of the biggest trolls on twitter, was twitting stupid stuff such as ”as if we were the ones to tell this kid to go get bread in this chaos”.
It is clear that Berkin’s death now sparkled another wave in Gazi protests. People are angry, and they have all the right in the world to be angry. They are not just angry that Berkin is dead. They are angry, because even after 269 days Berkin’s family could still not find justice in Turkey, and that Berkin’s murderers, their names still not exposed, are still free. 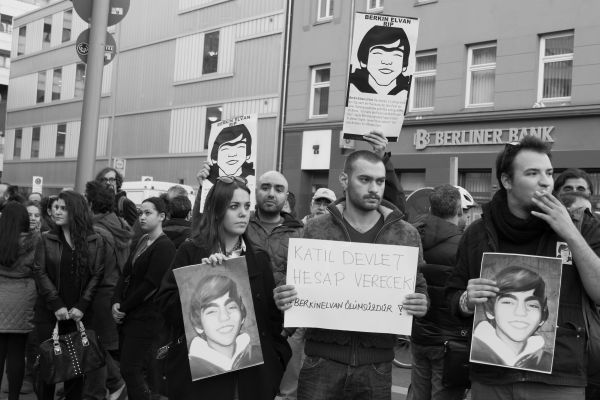