Creating our own side 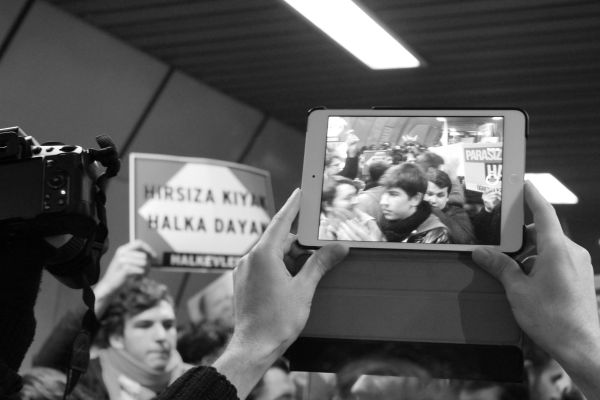 The recent events – not only in ukraine but also in hamburg and before in syria – show well how bourgeoise media covers political news. Fascists on the streets of kiev become beloved freedom fighters while autonomous protesters in hamburg face being declared terrorist. Al Qaida forces are ennobled democratic resistance in Syria, the news about regime changes stop being provided when in the result of the victory of NATO pogroms against black people take places – as it happened in the case of Libya. Tremendous efforts are made to criminalise the actions of refugees protesting against their inhuman treatment by german authorities while the ordinary murder on European boarders committed by FRONTEX is not worth being frontpage news. An enormous ammount of uniform propaganda presented in the robe of pluralism is served to people everyday aiming at keeping them silent and stupid as they are supposed to be to function.

But not only the bourgeoise media is to blame. Also left wing declarations often fail to show the complexity of modern class war. Instead of seeing how difficult to understand some situations are and finding a position that would be according to revolutionary internationalism, many left observers immediately choose to stand on one of the “sides” that imperialist logic offers us. Take the battle on ukraine: Either you are with Janukowitsch, claiming he is the legitimate president and last resort against western influence, or you are for the protesters, claiming it is a “ukrainian spring” in which people are fighting a just fight for their rights.

According to which side they take many choose the propaganda they should repeat without questioning it. By doing so they accept the pattern that the logic of nationalism and capitalism is giving them. In a situation in which both dominant sides are nothing but fucked up shit we cannot do anything of value but creating our own side.

If you are in areas where news happens participate in building up lower class as a credible news source of the radical left. Don´t hesitate to send us sources, pictures, texts, leaks, analysis – information of every kind.

Ein Kommentar über “Creating our own side”