15th December 2013. A local network, Linje 17 (named after the subway line where the network was created), is demonstrating in the suburb Kärrtorp in southern Stockholm, Sweden. Young and old, parents with strollers, simply anti-racists of different origins – in total of a few hundred. The reason for the demonstration is that the Nazi organisation SMR (Swedish resistance movement) has become more active in the area and has been spreading their hate propaganda around schools and other places. 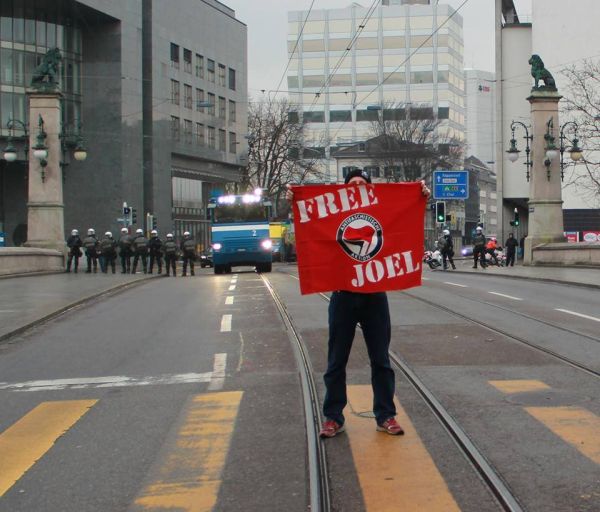 When the demonstration has been going on for a while suddenly around 40 members of SMR appear. They have their obligatory green scarfs on, and they are armed. They also carry home made shields. Panic develops in some parts of the demonstration. Bottles and stones rain down on the demonstration and people are running to protect themselves and their kids. But not everybody is running. A handful of organized anti-fascists place themselves between the attackers and the demonstration. More people join up and together they push back the Nazis to a wooden area. They are beaten bloody and one is cut with a knife.

The events that follow are extremely strange. One of the anti-fascists, Joel, is arrested and put in custody for the grave crime of attempted manslaughter. If he becomes convicted he will spend many years in prison. The crime classification and the arrest is completely absurd. Joel took part in the defence of a peaceful unarmed peoples protest against Nazis trying to establish their presence in Kärrtorp and surrounding neighbourhoods. He helped make sure the other anti-racists were not harmed. He is treated like a criminal despite his unselfish act of protecting the safety of innocent people and their right to protest for a community free from Nazi violence and propaganda.

When this is written, in the middle of January 2014, Joel is still in custody with full restrictions. The prosecutor has been on Christmas leave. So has the only (!) sniffer dog that can go through all the clothes and books that are being sent to Joel. The treatment is inhumane: it takes weeks before he can even borrow a book from the prison’s own library. He can’t see his child, he can’t read newspapers or see the letters and postcards that are sent to him from comrades in Sweden and abroad. After some weeks he at least receives some of the letters. They have of course been looked through and censored by the prosecutor.

Through his lawyer Joel has been able to send one message: He is very grateful for the letters and postcards that are sent to him, they strengthen him. He also wants people to write to other imprisoned comrades. We, the Swedish anti-fascist movement, call for all anti-fascists in Germany and other countries to show their solidarity with Joel. Write to the group Free Joel and the letters will be printed out and sent to him [facebook.com/freejoel]. You can also buy a Danish Free Joel t-shirt to support our comrade financially [facebook.com/projektantifa].

Spread this text to as many people as possible.

Repression is their weapon – Solidarity is our strength.

Anti-fascism is always self defence! #Freejoel